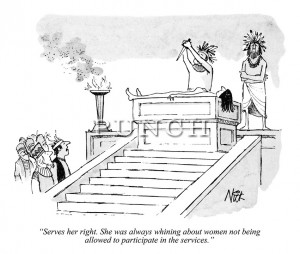 While traveling at a high altitude to a lectureship last year, I picked up a magazine furnished by the airline to pass the time. The above caricature caught my eye and set my mind to thinking on some of the infringements of truth in our day. I fear that false teachers, sometime referred to as liberals, would push some unsuspecting souls into wrong positions in order to “restructure” the Lord’s church and make it another denominational body without the identity given to it by the Lord (Acts 20:28; Mark 16:18; Ephesians 5:22-23).

My impression of most of our ladies in the church is that they desire to walk in truth, be modest, and respect the Lord’s order in their life so as to not be made into, nor be used by others to become, the “silly women laden with sins, led away with divers lusts” (2 Timothy 3:6). Some teachers, who seemingly have designs on “change” at all cost, would be willing to put the ladies out front, even if it took making them the “sacrifice” of their error. Under the guise of giving women a more prominent and authoritative position in the church it is feared they will only make them the “sacrifice” to use for their own de-sired ends.

No one appreciates godly women more than this writer, who also knows of the many good works that are accomplished by them in the name of Christ. But it is also known that these godly ladies are concerned to respect God’s word, the order clearly taught in the holy scriptures, and who will not allow others to place them in the position of the “sacrifice.” We commend the Christian ladies who would not allow the Nashville “Jubilee” promoters to jeer them into positions of disobedience!

Paul’s great letter to Timothy, was for the purpose of helping him to: “know how thou oughtest to behave thyself in the house of God, which is the church of the living God, the pillar and ground of the truth” (1 Timothy 3:15). It surprises this writer that some would suggest that Paul was not referring to the assembly of the church in public worship when he wrote, “that men pray everywhere, lifting up holy hands” and that women are to “learn in silence with all subjection” (1 Timo-thy 2:11). And, in the following verse Paul says, “But I suffer not a woman to teach, not to usurp authority over the man, but to be in silence” (1 Timothy 2:12). For certain, wom-en under the proper circumstances can (and are commanded to) teach (Titus 2:3-4), but not in the presence of men, or in taking charge over the man. In the Corinthian letter, Paul also writes clearly that, “God is not the author of confusion, but of peace, as in all churches of the saints. Let your women keep silence in the churches: for it is not permitted unto them to speak; but they are commanded to be under obedience, as also saith the law” (1 Corinthians 14:33-34). They can sing in the public assembly (Ephesians 5:19), but are not to lead the singing. They can publicly confess with the mouth Jesus as Lord (Romans 10:10), but are not to publicly preach; all because of the inspired limitations. These teachings are not for their harm, but for their protection!

Ladies, do not allow some to “make you the sacrifice”!